In the world of statehood, spying on your friends is nothing new; a lesson the African Union (AU) learned last year when it was discovered that China had been downloading sensitive files from the organization’s main database for the past 5 years. The revelation, exposed by France’s Le Monde, proved to be an embarrassing and tense moment for Sino-African relations, as officials on both sides have often proclaimed that economic and political partnership is built on a strong foundation of mutual trust and equal respect. The recent incident involving Chinese agents infiltrating the AU headquarters has sparked off a number of questions about the future of multilateral relations between China and several African nations.

China has vehemently denied the allegations. While initial reports emerged portraying outrage amongst some African leaders, the AU official response has now aligned with China’s rhetoric. Chinese foreign ministry spokesperson Hua Chunying has announced that the allegations are “groundless and ridiculous,” while a special statement issued by the Chinese Foreign Ministry heavily implied that the report was an attempt by Western powers to create division and such an incident will not tamper with the strong ties Africa has to China.

The AU’s stance illustrates the inherent complications of its economic trading relationship with the world power, as the scandal threatens to undermine the economic strength and performance of the AU and the African continent as a whole.

The political upheaval over spying kicked off in January 2018, when French publication Le Monde released an investigative report that exposed a huge data breach at the African Union headquarters. According to Le Monde, AU officials discovered a year prior that sensitive material was being downloaded from the AU servers to Beijing every night since construction of the AU headquarters was completed. Although microphones in desks and walls were detected, and in some cases surveillance bugs were removed, the organization chose to remain silent on the matter until the Le Monde report came to light.

The AU headquarters was built in 2012 in the Ethiopian capital of Addis Ababa, reportedly at a cost of $200 million; its inauguration was presided over by then Chinese President Hu Jintao. The construction of the building by Chinese contractors was supposed to be a symbol of Africa’s burgeoning relationship with China and a proclamation of a new era of economic cooperation.

The souring of relations? Though many interpret these events as a harbinger of a downturn in Sino-African relations, it is more likely that the strong economic and political bilateral partnership will continue, albeit in a slightly strained fashion. The increasing interdependence of the Chinese and African economies has given rise to a zero-sum relationship: should either side decide to weaken relations, economic performance for both would be threatened. For the past decade, China has invested heavily in Africa. At the 2015 Forum on China-Africa Cooperation (FOCAC) summit in South Africa, China pledged to pour $60 billion into construction projects across the continent, and has already provided more than $149 billion in trade with the continent since 2016. China has also made security contributions in certain hotspots such as South Sudan. In addition to Chinese investment, access to Africa’s vast natural resources has been the key incentive in formulating stronger economic and political ties with the continent – to lose or jeopardize direct access to those resources would hamper China’s role as the world’s largest manufacturer. From acquiring oil in Nigeria and Angola, to cobalt in the DRC, the importance of strong African relations is paramount to maintaining China’s position as an economic powerhouse.

African nations are in a similar position. Wary of Western powers due to their colonial legacy and decades of interventionist policies, African leaders have tried to undermine Western influence through their partnership with China. A relationship of convenience due to China’s non- interventionist foreign policy and low-interest loans, several African nations have benefited heavily from their ties with China and as such, so far as the AU is concerned, it appears that this relationship is worth the price of some Chinese monitoring. The AU decision to keep quiet after the bugs were found in the organization’s main server is indicative of this; most likely the regional body accepted it as a necessary sacrifice in order to maintain China’s friendship.

However, the political upheaval following the investigative report will still require both China and the AU to confront the suggestion that their partnership has a power imbalance. This has been seen through PR attempts by China, who have reiterated their stance to respect the AU sovereignty and expressed their desire to continue investment; most likely an attempt to stress the longevity and strength of Sino-African ties. Behind closed doors, Chinese diplomats will be assuring their African counterparts with promises of greater investment and non-intervention – a back door policy that has manifested in China reiterating its conviction to maintain the strong multilateral partnership, joined together by mutual solidary.

A response from the AU. Nevertheless, it cannot be denied that the recent investigation has caused a sense of embarrassment amongst AU members, and a seed of distrust has been sown. While this will not greatly undermine the relations China has with its most prominent African partners such as Rwanda and Nigeria, other AU members such as Botswana may use the latest incident as a cause for distancing itself from an overreliance on China. Relations between the two have been strained as a result of a cancelled state visit from the Dali Lama, following Chinese pressure to bar the spiritual leader from entering Botswana. The external intervention from China has given the Botswanan government pause, instilling a sense of ambiguity in their bilateral relations. Despite this, Botswana appears to be the exception and not the rule, though the recent incident may sour relations with the southern African country, it will bear minimal impact in terms of China’s overall foreign policy within Africa.

However, the surveillance accusations may bring about longer term consequences for China if similar incidents come to light. The AU is not the only building that could have been compromised, and according to The Diplomat, China has secured deals to build and finance parliament buildings in Zimbabwe and the Congo, as well as finish parliament building projects in Malawi, Seychelles, Guinea-Bissau, and Lesotho. If the AU was indeed compromised as the Le Monde report claims, then it is possible for the parliamentary buildings that Chinse contractors to also have been compromised.  The most immediate result of this would be African nations becoming increasingly wary of utilizing Chinese construction companies for future projects, particularly ones with a political or security dimension. They may start to look inwards toward their own manpower and resources, a notion echoed by Rwandan President Kagame in the AU Summit last month. Mr Kagame questioned Africa’s dependency on foreign donors: “Africa isn’t going to remain a place that keeps depending on the kindness of other parts of the world. There are things that we can depend so much on ourselves – if we have problems, we mobilize resources and deploy resources to get the results we want.”

Given than an open breach is an unacceptable outcome for both Chinese and African foreign policy, it is likely that the official rhetoric will put an emphasis on blaming the Western media for attempting to undermine Sino-African relations. This Western smear campaign will allow all parties to circumvent the uncomfortable realities at the core of existing power dynamics between China and various African countries.

While this will be the official policy of the AU, African leaders will remember the incident well and take steps to watch the movements of their largest trading partner more closely, most likely in the form of sweeping all government buildings constructed by Chinese companies. In the long term, relations will not sour as a result of the recent spying accusations; however, the seed of doubt may bring about a search for allies who appear to be more trustworthy. 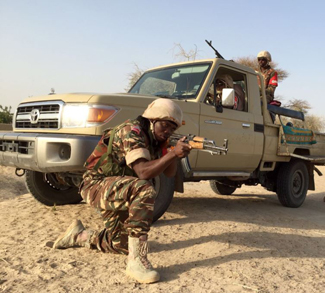 The African Union: Summitry or Substance?

An African Powder Keg: Terrorism in the Sahel