The Treaty of Trianon Turns 100: Unfinished Business in Central and Eastern Europe

The 4th of June, 2020, marked the 100th anniversary of the Treaty of Trianon, which dismembered the multi-ethnic Kingdom of Hungary (one of the two constituent states of Austria-Hungary), and granted two thirds of its’ territory to Czechoslovakia, Romania, and Yugoslavia. The anniversary was marked by nation-wide commemorations in Hungary. The issue still often raises tensions in the region between Hungary on one side, and Romania, Serbia, Slovakia, and Ukraine on the other, with the latter accusing Hungary of aspiring to retake former territories of the Kingdom of Hungary, and Hungary accusing the four of forced assimilation of numerous indigenous ethnic Hungarian minorities living on their soil. As in most cases of similar interethnic tensions, from Northern Ireland to Lebanon, the issue is also heavily loaded with historical grievances on both sides, from assimilation policies of the Kingdom of Hungary in 1867-1918 to the Benes decrees targeting the ethnic Hungarian minority of Slovakia, and atrocities committed by both the Hungarian and Romanian armies against each-other’s civilian populations in both World Wars, as well as a history of Hungarian-Romanian and Hungarian-Serb tit-for-tat interethnic atrocities reaching back to the 18th century.

Had the Treaty of Trianon only split from Hungary populations of other ethnicities, it would already be mere history now. Borders however were drawn in a way that large chunks of land inhabited mostly by ethnic Hungarians were, without their consent, given to Czechoslovakia, Romania, and Yugoslavia. This occurred to a degree that close to one third of the population of those territories given to these countries were ethnic Hungarians, and they also represented one third of all ethnic Hungarians living in the old kingdom. This resulted in significant majority ethnic Hungarian regions within the borders of interwar Czechoslovakia, Romania, and Yugoslavia; the same situation was subsequently inherited by modern Romania, Serbia, Slovakia, and Ukraine. The number of ethnic Hungarians in these territories was about 3 million at that time. As about one million of them have fled these areas in the past one hundred years (more than 400 000 were forced to leave right after the Treaty of Trianon, about the same number after World War 2, and a smaller, but nevertheless significant wave after the fall of the Soviet bloc), and assimilation was also significant, especially in Slovakia, their numbers have since dwindled. However even so, in Romania today, out of the 41 counties of the country, ethnic Hungarians still constitute more than 70% of the population in two, and between 20-40% of the population in another four. In Slovakia at the same time, they make up about 8.5% of the country’s entire population. Regardless of historical issues, today Romania and Slovakia are the ones with ethnic Hungarian minorities constituting a majority of the population in vast regions of the two countries, and not the other way around. This consequence of the Treaty of Trianon is thus still an ongoing issue today.

According to the Romanian and Slovakian point of view, conditions of the ethnic Hungarian minorities should already be seen as sufficient, as they have a school system and a limited administrative use of Hungarian language is granted in municipalities with more than 15% and 20% ethnic Hungarians. The Hungarian point of view on the other hand focuses the lack of semi-autonomous status of larger ethnic Hungarian majority areas, and co-official status of Hungarian language, pointing out that in most countries of Europe today, major regions with a distinct language and cultural character as well as and indigenous minorities constituting a significant portion of a country’s population, either have their own semi-autonomous regions, or their languages codified as co-official: South Tyrol in Italy, Northern Ireland in the UK, the Basque Country and Catalonia in Spain are all examples for autonomous provinces. Swedish language in Finland has a co-official status, being strictly equal to Finnish in bilingual areas of coastal Finland, and Albanian has a co-official status in North-Macedonia.

The sources of widespread discontent among ethnic Hungarian communities of Romania  and Slovakia as well as in Hungary itself since the 1990s are issues such as constantly facing the discrepancy of Szekelyland/Secuimea, the majority ethnic Hungarian region of Romania being denied from the kind of autonomy that South Tyrol, Northern Ireland or the Basque Country enjoys, or the ethnic Hungarian minority of Slovakia being denied from having co-official status for their native language such as Swedish in Finland, or Albanian in North Macedonia. A discrepancy that in the eyes of Hungarians, especially when viewed in scope of on the values of democracy and subsidiarity, routinely voiced by the EU, has no justification and little reason to accept.

The mere size of ethnic Hungarian minorities in question certainly justifies such claims: Szekelyland/Secuimea, the majority ethnic Hungarian region of Romania, roughly covers the territory of three counties: Mures, Harghita and Covasna. The three counties combined represent an area of 17,063 square kilometers, and according to the 2011 Romanian census, a population of 1,031,000, with ethnic Hungarians forming approx. 58% of the population, ethnic Romanians 35%, and the rest being mainly Romani. This means an area more than two times the size of South Tyrol or the Basque Country, and even larger than Northern Ireland, although the population being smaller than the latter two, but still about double the size of South Tyrol. Even when compared to smaller sovereign countries of Europe, we can see a region with an area close to that of Slovenia, and a population close to that of Estonia. Regarding the status of Hungarian language in Slovakia, taking the status of Swedish in Finland appears to be justified as ethnic Hungarians make up 8.5% of Slovakia’s population according to the census of 2011 – a larger portion than the 5.2% Swedish-speaking minority of Finland. As an opinion poll conducted by the Hungarian Academy of Sciences showed, 80% of Hungary’s population sees supporting autonomy aspirations of ethnic Hungarian minorities as a priority.

Ethnic Hungarian communities in Romania and Slovakia recently voiced such claims, as demonstrated by the autonomy bill introduced by UDMR/RMDSZ, the ethnic Hungarian party of Romania, and rejected by the Senate of Romania earlier in 2020, and a memorandum handed to the prime minister of Slovakia by SMK/MKP, an ethnic Hungarian party, in June 2020. Allegations of a discriminatory attitude on behalf of the Romanian and Slovakian administration put a further burden on the issue, as in cases such as a High Court of Slovakia ruling in 2019 on the confiscation of a forest estate of an ethnic-Hungarian Slovak citizen due to his ethnicity based on the Benes decrees, and  certain cases of properties o ethnic-Hungarians in Romania being re-confiscated by the Romanian state after having already been returned to their owners as part of general reparations in the country regarding property nationalized during Communist rule.

So to judge to what degree the Treaty of Trianon still represents a geopolitical issue today, we can differentiate according to these Hungarian aspirations. Restoring the Kingdom of Hungary is definitely not one. Changing borders is not one either; however, achieving regional autonomy and language rights common in similar cases in most countries of Europe definitely is an issue, and so is the discontent both among ethnic Hungarian communities of Romania and Slovakia so long as these goals are not achieved.

Luckily the issue has remained relatively peaceful in the three decades since the fall of the Soviet bloc, except for the violent clashes in Targu Mures in March 1990. No ex-Yugoslavia-style violence took place, and insurgencies like the Irish IRA, Basque ETA or the South Tyrolean bombing campaign of the 1960s haven’t emerged either. However, as long as the issue remains unresolved, it will always be a destabilizing factor, creating the potential for conflict, and it will potentially be a tool for any power that aims to “divide and conquer.” Therefore, resolving it with a true compromise satisfying both sides would be vital for the stability of the region. 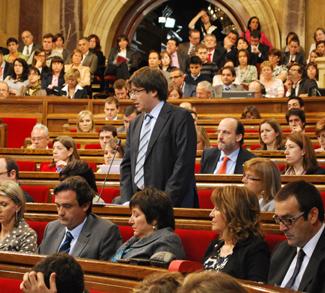