On his flight back home from Kabul, Prime Minister Modi broke the journey at Lahore. This unusual drop off has become a subject for speculation. A Congress spokesman has said that the Indian nation will have to pay heavily for the tea Modi had with Pakistan premier Nawaz Sharif at his family residence in Raiwaind.

Some have called the visit “sudden”; yet it doesn’t seem to be sudden.  High-level visits, even if for a couple of hours only, are neither sudden nor unscheduled. And of course, the nature of the mission demanded secrecy.

Bitter and entrenched acrimony has bedeviled relations between the two countries for the last seven decades. A quick change of heart seems somewhat unrealistic. Nevertheless, human ingenuity has no limits. Wonders happen in the affairs of nations: the Berlin Wall was demolished, the Soviet Union imploded, the Irish problem was resolved, and more recently Iran-US relations have come back online after a long hiatus.

The real source of the Indo-Pak logjam is Pakistan’s army, which, in turn, is a beneficiary of the Pentagon’s patronage and material support. Patronizing Pak Army serves two broad purposes of Pentagon: (a) it is a bulwark against Russia’s lengthening shadow over the Central and South Asian region, and (b) it secures the Saudi monarchy against internal and external threats, Iran in particular, right or wrong.

Pakistan army has its own well laid out agenda as well.  It has somehow convinced the Pentagon that its anti-terror policy is flexible and region-specific. We can substantiate this viewpoint: The US closed its eye to Pakistan clandestinely building a nuclear arsenal. But it destroyed Saddam and his Iraq for the alleged possession of a nuclear bomb, which never was there in the first place.

In the United States’ calculus, the ‘military-dominated’ elected government in Pakistan is not really distasteful to her people. That appears to be a contradiction in terms to foreigners but not to locals.

How does Pak Army rationalize its extra-constitutional supremacy in running the affairs of the country?  Kashmir comes handy. Any elected or officially installed government in Islamabad attempting to make even the slightest deviation from the army’s patent Kashmir policy is shown the exit door. Ali Muhammad Bogra, Benazir Bhutto, Nawaz Sharif and others stand testimony to this reality.

This is why resolution of the Kashmir imbroglio defied even the sharpest of minds of Z.A. Bhutto and Sardar Swaran Singh.

The crucial question arising from Modi’s puzzling move is this: If Nawaz Sharif has decided to walk an extra mile with Modi, has he taken his army chief on board? If not, then he is riding a tiger. If yes, that speaks to the role of Pentagon.

Ordinarily, the army chief is answerable to his corps commanders and not either to the government or the parliament, let alone civil society. However, in the overall spectrum of regional strategies, Pak Army has to be on the same page as the Pentagon.

What actually transpired between Obama and Nawaz Sharif at the White House during latter’s October visit is not known to us. Nevertheless, in all probability it was germane to what followed next. Within two weeks, General Raheel made his appearance at the Pentagon. It must have been an unsavory decision for the Pentagon hawks.

The Obama administration has begun to feel that American lawmakers are somewhat skeptic about US’ handling of Afghan situation. They are concerned about the fall (and subsequent recapture) of Kunduz, the northeastern province of Afghanistan. Russia’s strafing of Daesh bases on one hand and ISIS attacks in Paris on the other, add to the complexity with which Obama administration is beset.

In response to the State Department’s demand, Nawaz Sharif would not hesitate to impose a ban on the Haqqani terrorist network – an armed group active against the US in Afghanistan – with bases in Quetta in Baluchistan. His problem is that the Haqqani group enjoys the patronage of ISI and Pak Army, which only the Pentagon can call a halt to.

Apart from this, the US intelligence sleuths talk a good deal about the danger of Pakistan’s nuclear weapons, particularly the China-borrowed short-range localized nuclear bombs technology, as a major threat to peace in South and Central Asia as well as the oil-rich Gulf where the U.S. and developed countries have a significant stake.

This is where the State Department and the Pentagon realized that the Indo-Pak logjam needed to ease bottlenecks in its defensive-offensive tactics in Afghanistan, Central Asia, and the Gulf region.

For Pak Army, a climb down is not that simple. It means overhauling regional strategy in a big way. But if that is what we try to infer from these Modi-Sharif antics, the army will demand its pound of flesh. Thus a deal between Islamabad government and GHQ becomes a corollary to the entire gamut of the Indo-Pak thaw.

General Raheel was given a red carpet reception in Washington. He was allowed to address two Congressional committees, met with Vice President Biden and Secretary of State Kerry besides top brass of US military. Apparently all this was done to convey to him US’ thankfulness for his role in fighting the jihadis in North Waziristan. However, behind all these sweet gestures was a terse message also. Home-made jihadis were to be demobilized. He has been promised the release of 300 million US dollars by way of support to Pak Army’s North Waziristan military operations, besides a hefty package of sophisticated military hardware. US planners are adepts at blowing hot and cold.

A State Department spokesman has welcomed Modi’s Lahore jaunt. So has Ban-ki Moon, UN Secretary General. There are a host of issues remaining between the two countries. A step-by-step approach to their solution is just common sense. However, Kashmir outstrips all of them. Any formula agreed upon by the two sides on Kashmir will obliquely take into consideration the ground situation in the state on both sides of the LoC.  Any redrawing of the dividing line is out of the question, but facilitating people to people interaction and an expansion of trade is possible. Once a final agreement is reached, re-organization of the state can be facilitated along with blunting the teeth of insurgency and separatism. From the Indian side, Pakistan has to address three main issues: dismantling terror structures, stopping infiltration and firing and shelling across the border, and bringing the Mumbai culprits to book. On the Pakistani side two issues are on their priority list: demilitarizing Siachin and guaranteeing the security of Pakistan’s border with India. Obviously, third-party intervention to break the logjam remains a well-guarded secret, though its role becomes more perceptible now than ever before. 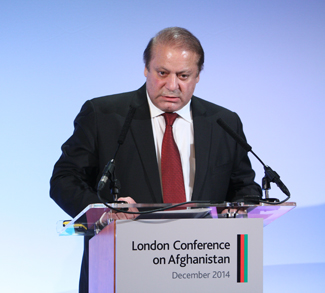