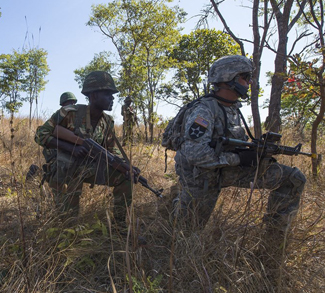 The militant ambush that killed four US servicemen and five Nigerien troops in Niger on October 4 has thrust US actions and policy in Africa’s Sahel into the spotlight for perhaps the first time. This was inevitable: America’s regional operations have been ongoing from the earliest days of the “War on Terror” and now go back 15 years. Nikki Haley, the US ambassador to the UN, has made clear in her ongoing visit to the continent that Washington sees Africa’s political and humanitarian struggles as a future threat to American security interests.

Those concerns predate Donald Trump by at least two administrations. Since 2002, thousands of American military personnel have been deployed to the Sahel to counter militant activity in one of the world’s most ungoverned areas. Governments and security forces in Burkina Faso, Mali, Chad, Mauritania and Niger have received training, equipment, funding, and advice from their American counterparts. These partnerships began under the Pan Sahel Initiative (PSI) and then the Trans-Saharan Counter Terrorism Initiative (TSCTI) before the Pentagon finally launched AFRICOM in 2007 as a separate command structure. There are an estimated 800 US military personnel in Niger and at least 1,500 in the wider region.

This US support is meant to help the region’s governments counteract well-established criminal networks, including trafficking routes that carry guns, drugs and people across the Sahara, but most especially to fight the militants of Al-Qaeda in the Islamic Maghreb (AQIM) and now Islamic State (IS). Those challenges have intensified since the civil war in Libya: since the collapse of Muammar Gadhafi’s regime, the region has been awash with weapons.

And yet, the American public’s reaction to hearing four US soldiers had been killed has been above all confusion. What, they asked, were the troops doing in Niger? This blissful unawareness of an entire theater of operations extended to the highest levels of government. Even Senator Lindsey Graham, one of Congress’ most outspoken and aggressive foreign policy voices, seemingly did not know that US military personnel are deployed to the country. It took President Donald Trump 12 days to respond to the news, and only then to spark outrage and ridicule with his botched condolences to the pregnant widow of one of the servicemen, Sgt. La David Johnson.

While the controversies surrounding Senator Graham and President Trump may be embarrassing for the US government, this incident has raised questions that were long overdue. Unlike interventions in Afghanistan, Iraq, and Syria, America’s counterterror operations in the Sahel have been carried out without public scrutiny or debate. As a result, US policies in the region (and indeed throughout West Africa) have been squarely focused on security and military force. Meanwhile, issues surrounding development, economic stability, and other indispensable components of a comprehensive regional strategy have fallen by the wayside.

Part of this may be because the United States is content to take a back seat in the Sahel. While American forces work behind the scenes, France largely takes the lead across West Africa. It was the French military that intervened in 2013 to repel jihadist militants and Tuareg rebels threatening to conquer the whole of Mali. Operation Serval ended with declarations of victory, but the 5,000-strong Operation Barkhane remains ongoing in Mali. It was also France that ultimately reinforced and extracted the US/Nigerien patrol on October 4.

That is not to imply that the United States and France always act in concert. The two sides only recently resolved a dispute at the UN over French plans to form a regional “G5 Sahel” African security force. According to French sources, Washington’s objections to the new peacekeeping force mostly came down to not wanting to fund it.

Despite France’s claims, there are valid reasons for skepticism when it comes to the region’s own forces. American planners are well aware that their local partners oftentimes fuel the very forces that foster violent extremism and instability through their authoritarian governing styles.

Mauritania (a key member of the G5) offers one of the most recent examples. President Mohamed Ould Abdel Aziz has ruled as a strongman and stamped out dissent since coming to power in a coup in 2008, but he pushed his monopolization of political power still further by abolishing the country’s Senate in the name of “decentralization” this past August. Both his opponents and outside experts see Abdel Aziz’s actions as laying the groundwork to change the constitution and run for a third presidential term.

While Abdel Aziz dismantles checks on his political power, Mauritania remains one of the world’s worst offenders in perpetuating modern slavery. The Global Slavery Index estimates that 43,000 Mauritanians are enslaved. American diplomats publicly support Abdel Aziz as an important partner in the fight against terrorism, but leaked diplomatic cables going to back to 2009 show they are perfectly aware of his undemocratic governance and lack of concern for human rights.

Critically, Mauritania has gotten poorer over the past few years. Economic and social development should be a key part of US strategy in West Africa, but American relationships with Abdel Aziz and other regional partners have long been dominated by security. This dynamic will only be exacerbated by the Trump administration’s moves to boost military spending at the expense of foreign aid. While American officials like Nikki Haley proclaim their dedication to addressing the root causes of instability and radicalization, they seemingly view the $8 billion in US funding for education, economic advancement, public health, and other critical development challenges on the continent as fat to be trimmed.

Putting on militaristic blinders is a surefire way to make sure the Sahel countries remain poor and their populations disaffected – a recipe for successful recruitment by militant groups. As long as this state of affairs persists, the US forces in the Sahel may as well be running through quicksand.