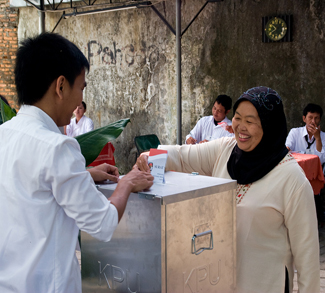 From November 2013 to January 2014, the University of Jayabaya (UJ) periodically conducted surveys related to the electability of political parties and presidential and vice-presidential candidates for the 2014 elections in Indonesia. The results show that the electability of the Democratic Party and the Prosperous Justice Party (PKS) have been decreasing following a string of corruption cases. Surveys were conducted in 33 provinces, taking a sample of 1,225 people which have the right to vote. The margin of error is + / – 2.8% and the confidence level is 95%.

When asked whether the respondents still believe that the PKS is a “clean party,” about 66% said “not sure.” Only 15.7% of respondents believe that the PKS is still a “clean party,” the rest (18.3%) did not know. When asked which party cadres are most involved in corruption cases, as many as 67.3% of respondents mentioned the Democratic Party. PKS came in as a distant second at 5.8%, taking over from Golkar Party in third (5.2%). When asked which party they would support if elections were held today, only 6.9% of respondents would vote for the Democratic Party, and 2.6% for PKS – much lower than their result in 2009, which was 8%.

In terms of electability, the Golkar Party remained in the top position with 18.9%. When referring to the results of a survey of various other research institutions, Golkar’s chances to win the 2014 election seem pretty open. The Golkar Party is still being trailed by PDI-P with a rate of 16.8% electability. Gerindra, which in the 2009 elections ended in eighth place, has now reached the level of 10.3% for third.

The high electability of the Golkar Party is apparently inversely proportional to chairperson Aurizal Bakrie (ARB), who is in fifth position as presidential candidate with 8.7%. This is far behind Joko Widodo (Jokowi), who ranks as the first public option among the most potential candidates (15.1 %).

Jokowi is a new symbol of hope for the people. He is simple, honest and populist. Jokowi is showing togetherness between the leaders and the led, evident in his frequent visits to slums in Jakarta. As was the case in the United States when people were disappointed with the war on terrorism of President Bush and elected Barrack Obama, it is possible that if Jokowi steps forward as a 2014 presidential candidate, the Indonesian people will choose him owing to their disappointment over the war on corruption under President Yudhoyono during his second term in office.

Jokowi’s electability levels surpass his competitors. The nearest challenger is Prabowo Subianto (13.9%), if the 2014 presidential election took place in two rounds where Jokowi went head-to-head with Prabowo. However, Prabowo Subianto and the Gerindra Party will need extra efforts to garner support from other parties in order to form a coalition. In preparation, he is meeting with various factions in order to garner support, such as with Hatta Rajasa, chairman of the PAN, and Susilo Bambang Yudhoyono (SBY), the chairman of the Democratic Party (PD). He is also diligent in communicating with a number of leaders of other parties, including the PDI-P. As a presidential candidate, Prabowo fits the bill on a number of levels. He was Megawati’s running mate in her unsuccessful 2009 campaign, and he will have learned much from that. His reputation feeds off a belief that Indonesia needs a return to assertive leadership, while his association with the former first family strikes a chord among a cross section of Indonesians who feel let down by democracy and who harbor a genuine nostalgia for the Suharto era.

Currently, the contending candidates are not incumbents or a candidate supported by the ruling party. The two biggest names, Jokowi and Prabowo, come from the opposition party. There is excitement to correct public policy and seek a different atmosphere from the color of the current ruler. These two figures represent the antithesis of SBY. Jokowi is a rustic figure, common people, not handsome, simple, informal, and so on. This contrasts with SBY; handsome, elegant, charming, and formalistic. While Prabowo represents nationalistic thinking, assertive, and pro-people – at least in his speeches. This is in contrast with the image of SBY who over considers the interests of the world and foreign investors, closer to the elite, and too cautious in his decision making.

The 2014 presidential election is not as simple as one might imagine, especially over the spread of electability numbers of various polls. The numbers are not fully pro-Jokowi. And there is still a possibility for surprises. First, if the courts annul the candidacy requirement of 20 percent and switch to three percent. Secondly, if there is a mistake made by Governor Jokowi or his supporters (the latter’s fanatical attitude as shown in the world of social media and the birth of the pro-Jokowi movement is a potential weak point unto itself). Third, if a new figure exists that could encapsulate all the expectations of the voters. Prabowo Subianto, who has a handicap in the past, was accepted because he carries this message. This expectation is also reflected in the high popularity of Dahlan Iskan and Jusuf Kalla. Still, the popularity of the president also shows that the public wants harmony, order, and decency.

Based on this survey’s findings, people crave the emergence of an alternative leadership figure. The people like leaders who have a love of integrity, and who are honest, clean,  populist, and have a strong commitment to the reform agenda, particularly in the eradication of corruption. The people would consider a candidate who has a proven ability to solve national problems, especially economic ones.

According to results from various surveys, Prabowo Subianto, electability-wise, is by far the strongest competitor for Jokowi. According to media monitoring, including social media, it is obvious that Prabowo – as well as Jokowi – is the leader figure that people are talking about. Prabowo’s popularity is able to counterbalance that of Jokowi’s. The public perceive Prabowo as a firm and bold figure. Not only that, he is also considered have the capability to solve Indonesia’s chronic problems, which are corruption, poverty, and security. Prabowo is being assessed as a candidate with the clearest and definite vision and mission compared to others, especially the one that related to his “Ekonomi Kerakyatan” program, like the one of 1 billion fund policy for every village in Indonesia.

In general, the results of the survey show several interesting trends:

There is a real possibility that the Democratic Party will be replaced as the largest political party by Golkar or PDI-P. The apparently never-ending internal conflicts surrounding the alleged involvement of some party leaders in a number of corruption cases is hijacking the Democratic Party and this could drag into next year. Not to mention the issue of dynastic politics, of which President SBY is often criticized.

The political map in the House of Representatives will likely become much simpler. This is owing to the decreasing number of political parties that will secure national parliamentary seats, as the parliamentary threshold is increased from 2.5 to 3.5 percent.

It is possible that the largest political party will not get more than 30 percent. Seats will be more evenly distributed over all parties participating in the elections. Indonesian voters tend to make their choices based on emotion. For either party that can maintain a good image, there is an abundance of opportunities from swing voters. But parties that suffer from bad press caused by “cases” will likely lose disproportionally. PDI-P and the Golkar Party tend to have a stable electorate.

There is a possibility that Islamic and Islamic-based political parties will be eliminated in the 2014 election. Factors are public policy mistakes by these parties and the absence of presidential candidates or high-profile leaders. The declining electability of Islamic parties could bring about “poros tengah” (central axis) discourse, or a coalition between Islamic parties, considering there is still electoral potential given the mostly-Muslim Indonesian population.

The 2014 election will be driven by the momentum of the transition generation. Currently only the PDI-P and the Democratic Party give ample space for the emergence of young leaders in 2014. About 40-70% of the productive age group (18-40 years) who become potential voters want change in 2014. The Democratic Candidates convention November 2013-March 2014 has a chance to end the gerontocracy (rule led by the majority of the elderly) in Indonesia. In the 2014 general election, there will be a potential for novice voters, most of which consist of young people comfortable with using the internet, to count for as much as 40 percent of total voters.

There will be a tendency of people not exercising their right to vote in the upcoming election (abstentions). This is also reflected in the considerable number of swing voters, i.e. those who do not or not yet provide a political choice (undecided voters). 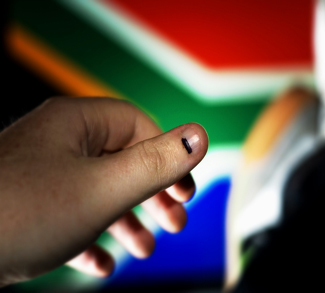 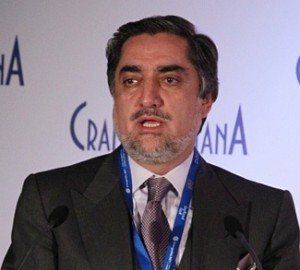