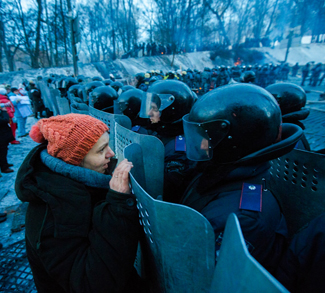 Despite the news from Kiev at the time of writing – that the Ukrainian Parliament has dismissed embattled President Yanukovych and secured the release of opposition leader Yulia Tymoshenko – Ukraine’s woes are far from over.

Protests in Ukraine have been increasing in scope and violence since President Yanukovych, under significant financial pressure from Russia, refused to sign a trade agreement with the European Union.  According to polls conducted last December, 43% of Ukrainians approve of closer links with the EU. Thus, bowing to Russian pressure was seen as a betrayal by many, and further evidence that the president favors the Kremlin over the western provinces of his own country.

Despite the presence of a clear pro-EU support base, the protests in Kiev remain contentious, with half the country opposed to them and only one in three believing they will produce a positive outcome.  The protests have also been marred by the presence of Ukrainian nationalist groups such as Right Sector and Svoboda, as well as by accusations of brutality levelled against both the Berkut riot police and certain anti-government groups.

Divisions in Ukraine go well beyond the politics of the moment.  Although somewhat of an oversimplification given the country’s complicated history and frequently contested borders, it is not unfair to split Ukraine into a mostly Europe-leaning, Ukrainian-speaking west and a mostly Russia-leaning, Russian-speaking east.  In terms of sociocultural identity, Ukraine could almost be considered two different countries, and this is reflected in its politics.

There is also a strong economic division, though this one is less geographic in nature.  As with much of post-Soviet Russia, Ukraine saw the rise of an oligarchical class who quickly captured former state assets, and then got involved in politics to protect their economic gains.  While these oligarchs span the political spectrum (indeed, Yulia Tymoshenko is included among their number), they have mostly been a conservative force in Ukrainian politics, fearing that closer integration with the EU could damage their standing.  The allegations of corruption surrounding these oligarchs, along with the dire economic situation in Ukraine, have combined to fuel much of the discontent of recent months.

Arguably the most important divide, however, is that of the country’s geopolitical positioning: placed precariously between NATO and Russia.  While Ukraine itself, given its many economic issues and wide political and social divides, would not present much of an advantage to either side on those terms, if Ukraine could be drawn into an alliance with NATO it would allow for an “early warning system” for the missile shield in Europe.  A NATO presence would also challenge the Russian Navy and jeopardize its base in Sevastopol.

Ukraine also forms part of the transit route for Russian gas exports, so a stable, friendly government in Kiev serves to reassure European and American leaders on energy security – even if the source (Russia) remains cause for concern.

Shades of the Orange Revolution

For these reasons it should come as no surprise that the US and EU have a vested interest in supporting regime change in Ukraine.  This isn’t even the first time that events have played out like this, as it was only a decade ago that a similar power struggle unfolded with many of the same actors.

At issue in 2004 was the question of who should succeed President Kuchma, as well as the various instances of irregularities, voter intimidation, and electoral fraud reportedly perpetrated by allies of Viktor Yanukovych, who had held the position of prime minister in the Kuchma government.  As a result, protests broke out all over the country, accompanied by sit-ins, strikes, and street demonstrations.

Some of these protestors had been trained by American NGOs, political consultants, and pollsters on tactics and how to handle the media, building on assistance extended to anti-government protestors in Serbia and Georgia the previous year.  Funding had come from US government departments such as State and USAID, and the controversial exiled Russian oligarch Boris Berezovsky also contributed a significant amount.

Conversely, Russia once again supported Yanukovych, and a variety of “dirty tricks” campaigns were alleged to have taken place with the connivance of pro-Russian oligarchs with strong ties to governments in both countries.  For legal reasons, these oligarchs will remain unnamed.

Unsurprisingly, there have been many allegations of US and German involvement in the latest round of protests – not helped by the undiplomatic language of Assistant Secretary of State Victoria Nuland and Ambassador Pyatt – which has created a perception of high-level US involvement against Yanukovych.  German non-profit organizations and think tanks have also been mentioned as having been involved in a capacity similar to the NGOs and political consultants of the Orange Revolution, working in partnership with Polish groups (which may in and of itself indicate a deepening relationship and working agenda between the two countries on non-EU eastern states that will be worth watching).

The Current State of Play

Evidence of foreign involvement will serve to undermine the credentials of the protest movement and the ousting of Yanukovych, which will play into the hands of his supporters and Russian backers, allowing them to paint any new government as illegitimate.  Despite the assistance rendered to the Ukrainian anti-government protestors, the movement did not require an external impetus to organize and protest – the conditions in the country were motivation enough to do so.  In particular, Nuland’s professional past threatens to lend weight to accusations of a new version of the neoconservative “freedom agenda” being applied to Russia’s near abroad and traditional zones of influence.

We should expect to see Russian assistance to their allies in the country being stepped up in the coming days.  Already the Russian-linked politician Vadim Novinsky played a “spoiler” role in derailing attempts to change the constitution a few days ago, and we can no doubt expect more attempts in the coming days to undermine the incoming administration.  In addition to this, Russia is likely to exert significant political and economic pressure over Ukraine, though it is not entirely clear what form this will take.  Putin’s “hands off” approach suggests he does not want to involve Russia in an overly public way – probably a good idea, given the negative publicity this would generate in the West and beyond.

Also unknown at this stage is how groups like Right Sector and the fascist Svoboda Party will react to recent developments.  Right Sector’s leader has said his group is looking to run a presidential candidate, and that it may move towards adopting a more conventional political party structure. Right Sector also requested that protestors be represented in any negotiations with Yanukovych, reflecting the distrust between the liberal parties and protestors.  That they did not have a role in such negotiations implies a rift in the opposition movement, which would indicate that future protests are not out of the question. But for now, it seems like most actors are willing to give a new provisional government a chance. Just how long their patience lasts remains to be seen.

This article is the first in a series. For the second piece, entitled ‘Great Power Politics,’ please click here.

Dawn of the ‘Post-EU’ Era in Turkey’s Foreign Policy? 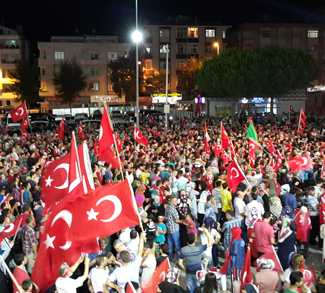