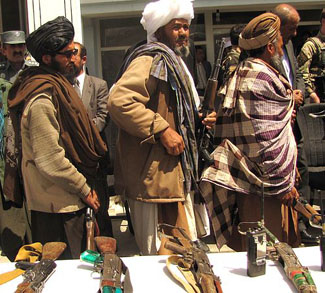 In August 1998, a mid-level diplomat in the US State Department received what must have been a startling phone call; on the other end of the line was Mullah Omar, the leader of Taliban-controlled Afghanistan. Up until that point, several of Omar’s deputies had spoken with American officials, but Omar himself had yet to make contact. According to the declassified record of the conversation, Omar stated that American military action would “spark more, not less, terrorist attacks.” The United States broke off the talks in the wake of 9/11, ultimately deciding that the Taliban and Al Qaeda were equally responsible for terrorism.

In early 2011, direct talks between Taliban leaders and US officials resumed as the result of a controversial decision by the Obama Administration. Given the Taliban’s violent history, human rights record and links with Al Qaeda, it is not surprising that a new round of talks took a decade to emerge. After twelve years of war the Obama administration evidently concluded that the current situation in Afghanistan cannot continue, and that a military solution to the conflict is not feasible.

While serving as Secretary of State, Hillary Clinton said of the talks, “I know that reconciling with an adversary that can be as brutal as the Taliban sounds distasteful, even unimaginable. And diplomacy would be easy if we only had to talk to our friends. But that is not how one makes peace…” The viability of a negotiated solution to the conflict increased with the death of Osama bin Laden in early 2011, which appears to have weakened the Taliban’s resolve to support Al Qaeda.

Though a consistent aim of American participation in the talks has been to support Afghan President Hamid Karzai, who has pursued sporadic and largely unsuccessful talks with the Taliban since 2008, aspects of the Obama administration’s approach to the talks have changed over time. Initially, the United States aimed to gauge which Taliban leaders might be willing to enter into formal peace negotiations, and encourage them to break with Al Qaeda and participate in Afghan electoral politics. More recently, however, the Obama Administration agreed to drop a number of preconditions to the talks in order to speed up the process.

Among the discarded preconditions was the American request for a formal Taliban rejection of Al Qaeda, which will instead be a “negotiating aim” of the talks. The precondition was dropped on the heels of an announcement by Taliban leaders that they would not allow anyone to threaten other countries from Afghan soil. Seen as the first step towards renouncing Al Qaeda, this pledge was a key development in the talks moving forward.

This month, the first official overseas office of the Taliban was opened in Doha, Qatar, where negotiations will take place shortly. President Obama, Secretary of State John Kerry and British Prime Minister David Cameron each expressed the opinion that opening the office was a positive move on the way towards negotiation and reconciliation. The Karzai administration’s role in the talks remains unclear as the Taliban continues to reject the government; indeed, the sign on the new office reads “The Political Bureau of the Islamic Emirate of Afghanistan in Doha,” which has already contributed to a much-publicized spat.

The low level of trust between Afghan civilians, the United States, the Karzai administration and the Taliban runs deep and encompasses longstanding ethnic tensions. The Taliban primarily draws its support from ethnic Pashtuns, though Pashtuns are also present in government. The most vehemently anti-Taliban militias are often non-Pashtun. Complicating matters further is Pakistan, which has a vested interest in the outcome of the conflict in Afghanistan and where Pashtuns are the second-largest ethnic group. Geographically, Pashtuns are concentrated in an area that encompasses much of the border between the two countries.

After Osama bin Laden was killed not far from the Pakistani capital of Islamabad, President Karzai accused Pakistan of not contributing enough to counter-terrorism efforts. Since December 2007, the Pakistani government and security forces have contended with a homegrown Taliban-like force called the Tehrik-i-Taliban Pakistan (TTP). Though the TTP and Afghan Taliban are both predominantly Pashtun and share a particular Sunni interpretation of Islam, the TTP is unaffiliated with the Mullah Omar’s Afghan Taliban. In fact, leaders of the Taliban in Afghanistan have sought to distance themselves from their Pakistani counterpart. It has been suggested that the opening of the Taliban’s office in Qatar was an effort to distance itself from Pakistan and enter into talks with the United States and Afghan government independent of external influence.

Deep-rooted mistrust is likely to characterize what will be a lengthy and fragile peace process. Just a few months ago, talks were stalled as Taliban militants intensified a campaign that targeted urban centres and government property. Negotiations will also hinge on the outcome of NATO’s withdrawal from Afghanistan. On the same day as the office opening, NATO handed the security of all of Afghanistan to government forces for the first time since the Taliban was ousted. Around 15,000 American and allied troops will remain in Afghanistan at Obama’s behest. Director of Research for the Brookings Institution Foreign Policy programme Michael O’Hanlon told the CBC that in his opinion, the Taliban “expect to win the war once NATO is largely gone come 2015.” O’Hanlon added that expectations of the talks must be kept low. Observers and officials alike must remember that the Taliban is still hostile to the Government of Afghanistan and does not intend to abandon its pursuit of an Islamic emirate, albeit a peaceful pursuit if the talks are successful.

Situation Reports November 1, 2018
Back to Top