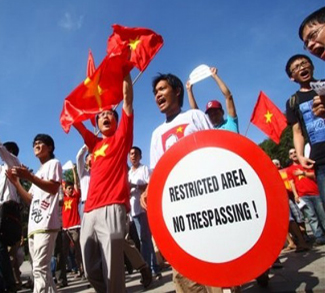 The conflict between China and Vietnam over the South China Sea is not just a petty squabble over maritime sovereignty. It is the first test of the new East Asian reality- a strategic landscape in which China has filled the security vacuum of waning US power.

In this sense, the South China Sea can be viewed through the lens of a soft proxy conflict: a US-backed Vietnam standing up to a markedly assertive Chinese territory claim. At stake is the establishment of a precedent over how these kinds of conflicts will be resolved in the future. Will China be able to convert its newfound economic and military might into the ability to bend neighbouring states to its will, or will it be hemmed in by the multilateralism that has characterized its ‘peaceful rise’ up until now?

It is no real surprise that Vietnam has chosen an assertive path on the South China Sea. Tough talk from the government and a live-fire military drill in the contested area both reflect Vietnamese sensitivity over being muscled around by its neighbour to the North. After all, Vietnamese distrust of Chinese intentions is somewhat of a historical constant and as such won’t be going away anytime soon. In this current situation, the Vietnamese government is drawing strength from a US offer to mediate South China Sea talks which was made by Secretary Clinton on a visit to Hanoi last year. It’s in Vietnam’s best interests to internationalize the conflict and try to escape its weak bilateral negotiating position vis-à-vis China. One of the best ways to accomplish this is short-term sabre rattling to pressure China into entering into a multilateral dialogue. If Beijing doesn’t bite, it risks being labelled as unwilling or unable to ensure stability in the region.

It should be noted however that Hanoi is playing somewhat of a dangerous game given the anti-China strain of Vietnamese nationalism. There have already been sparse anti-China protests in Hanoi and Ho Chi Minh City. If the Vietnamese government isn’t careful, it may fast find itself presiding over a populist anti-China wave that it cannot control.

It’s quite unlikely that there will be any dovish overtures coming from Beijing regarding a settlement in the South China Sea. China’s geopolitical worldview is still transitioning from the ‘peaceful rise’ (primarily aimed at avoiding a containment policy from the United States and its allies) into a more conventional regional strategy predicated on securing vital military and economic interests. In regards to the latter, the South China Sea is high up on the list for its value in strategic resources, shipping lanes, and finally its importance in pushing China’s security perimeter out from the coast. Another factor mitigating against a quick negotiated solution is the CCP’s impending political succession in 2012. Candidates will be sure to avoid any stances that could be construed as weak as they continue to jockey for support behind closed doors.

The US government will surely be watching this situation with great interest. Last year, we witnessed an extremely important implicit agreement be reached between Washington and Hanoi; mainly that the latter would offer the US a seat at the South China Sea table in exchange for negotiating leverage against China. This is critical for it proves that, despite the obvious historical baggage that exists between Washington and Hanoi, neighbouring states are still extremely nervous about China’s rise.

A negotiated solution over the short-term is quite unlikely, and if Vietnam does manage to internationalize the conflict, we can expect multilateral negotiations to be long and arduous. From a broader perspective, the course of this conflict will be illustrative as to whether or not US military power is actually a stabilizing force in East Asia.