Donald Trump and The Art of the Duped

Jamal Khashoggi, a journalist and frequent critic of the Saudi regime, attends a meeting at the Saudi consulate in Istanbul. His wife waits outside for him in a car, but her husband never exits the building. He has disappeared without a trace.

President Trump, after a call with the Saudi King: “maybe it was ‘rogue elements’ who killed him.”

Russia, a longtime enemy of the West, dusts off its Soviet-era information warfare playbook and makes it fit for purpose in the digital era. It puts these new methods to use by nurturing societal divisions and promoting parties sympathetic to Russian interests in elections across the democratic world. Intelligence agencies on both side of the Atlantic detect these activities and try to sound the alarm.

President Trump, after a summit with his Russian counterpart: “I don’t see any reason why Russia” would be responsible [for election interference].”

North Korea, a repressive regime that’s still technically at war with a US ally, flouts the international non-proliferation regime and becomes a de facto nuclear power. In the subsequent years it establishes a diplomatic pattern of promising big, delivering nothing, and employing all manner of schemes to induce appeasement from the international community, including rampant cyber-attacks and the sinking the Cheonan in 2010. The Trump regime initiates a new diplomatic initiative that’s front-loaded with concessions long sought by the North Koreans. Unsurprisingly, there has been no tangible progress toward denuclearization since then.

President Trump, after receiving a new letter from Kim Jong-un: “We’re in love.”

Trump seems willing to take friends and enemies alike at their word more so than any other US president in memory. Really, more than any elected leader in memory. You’d think that Saddam Hussein could have dodged Desert Storm if Trump were in power, just say the Iraqis were filming a war movie and then compliment the president on his tan.

But what is it that makes President Trump so eminently suggestible?

It could be that that’s just the way he is: easily duped. There’s no shortage of evidence to suggest this is the case. And many of these accounts come from administration insiders who would presumably know what they’re talking about.

If Trump truly is a dunce, then what does it say about the state of US civilization, where apparently anyone can become president so long as they’re blessed with a little luck and a “small” family loan of one (or several hundred) million dollars?

It’s far more likely that President Trump knows what he’s doing on some level. Trump isn’t dumb; he just assumes that we, the public, are dumb. He’ll say whatever he wants, no matter how ridiculous it sounds in the moment, because he knows that it won’t be long before the great gears of the news cycle churn out some new tidbit of scandal to titillate us.

And who can argue that he’s wrong? A growing number of us are simply willing to take the word of those who are in power. Good news is a win for the home team, fodder for our confirmation bias. Bad news is fake news: abjectly false, misleading, and/or planted by shadowy vested interests. And whenever a powerful figure is implicated in wrongdoing, a simple (or perhaps furious) denial is happily accepted as the height of exonerating evidence.

The dynamic leaves no room for consideration of the golden question: “Who benefits?” Could it be that the stupefying “rogue element” jaw-dropper has something to do with President Trump’s rumored business ties to Saudi Arabia? Of course not; Trump has firmly denied any such links on Twitter (fake news!). And what’s more, Crown Prince Mohammad Bin-Salman has given his word that his government had nothing to do with it. Case closed.

Trump might be suggestible to the point of absurdity, but who are we to judge when we’re just as bad? 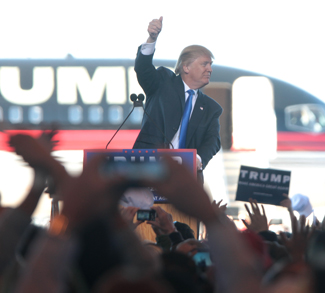