Backgrounder: the Rohingya of Myanmar 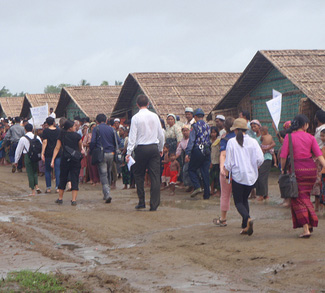 The  are an ethnic and religious minority of South Asia, mostly living in Myanmar. Their numbers are disputed, as are their origins in the region, but traditional animosities between the Rohingya and other ethnic groups, the Buddhist majority of Myanmar in particular, have resulted in considerable conflict over the years. A renewed wave of violence towards the Rohingya began in the summer of 2012, raising the international profile of this troubled region. According to the United Nations, the Rohingya are one of the most persecuted groups in the world.

Though organizations representing Rohingya interests claim that the Rohingya have existed in Myanmar since the early Middle Ages, the modern origins of Myanmar’s Rohingya community can be reliably traced to the late 19th century, when the British colonial government began to encourage Arab, Indian, and Bengali immigration as a source of inexpensive labour.

Backgrounders November 7, 2018
Back to Top